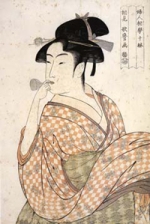 1753-1806
Ukiyoe painter. Also referred to as Hosho, Sekiyo, Mokuen, and many others as Betsugo. ügUkiyoe Ruikoüh tells, ügHe initially became a pupil of Toriyama Sekien to learn the Kano School paintingüh, but there is no particular proof in the pieces from his early times which could show he had been affected by Sekien, rather his style was close to Katsukawa School. Afterwards, he could be favored with the friendship of Tsutaya Juzaburo, a publisher, to dedicate many drawings for the comic tanka books with multi-color printed pictures issued by the above mentioned publisher. He opened a new frontier with a realistic expression which gradually made him popular. In approx.1891, he released ügBijin Okubieüh, a new style beauty. He used Kirazuri (applying a coat of shiny ground mica on top of a background ) or Kitsubushi (yellow ground) to become an important beauty painter.

Searched by  Artist "Utamaro"  Change of a search condition