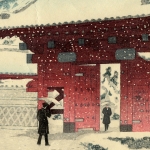 1898-1991
Kasamatsu Shiro, born in Asakusa, Tokyo, is a representative woodblock print maker of Showa period. He found a mentor in Kaburaki Kiyokata at 14, and continued his activities at Tatsumigakai and Kyodokai painting society for his life. His creation of Shinhanga (=new style woodblock print) began with his artwork ügSeiranüh published by Watanabe Print Shop in 1919, after that, he showed his artworks depicted landscape of Tokyo and other region, and Japanese traditional culture such as flower arrangement and Noh. From about 1955, he began to handle drawing, carving, and printing all by himself, thus continued his passionate creation until his death.

Searched by  Artist "Kasamatsu Shiro"  Change of a search condition