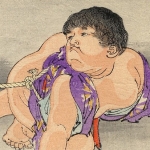 1863-1925
Ukiyoe painter. Also referred to as Gosai, Bansuiro and so on. A pupil of Yoshitoshi . He also learned oil painting under Kunisawa Shinkuro. His ukiyoe works are mainly about war such as the First Sino-Japanese War and the Russo-Japanese War.

Searched by  Artist "Toshihide"  Change of a search condition